Ohio University President M. Duane Nellis has named Julie Cromer the next Director of Athletics. She will join the Bobcats as OHIO's first female athletics director in University history on August 31.

Cromer comes to Ohio University from the University of Arkansas, where she has served most recently as senior deputy athletics director, associate vice chancellor and senior woman administrator for Razorback Athletics. In addition to her executive role at Arkansas, Cromer is a respected leader within college athletics nationally. She currently serves on the NCAA Division I Board of Directors and is a member of the Board of Directors of Women Leaders in College Sports.

"We're excited to welcome Julie to my leadership team at Ohio University," said President Nellis. "Her talent, vision, and passion for intercollegiate athletics and the student-athlete experience will only serve to elevate our athletic program and our University. With a keen understanding and focus for ways in which athletics can serve as a front porch for our University, Julie is especially poised to enhance our athletics program, bolster our student-athlete experience, and increase academic engagement, and I am confident that Julie is the right person to lead our Bobcat Athletics family as we move forward."

A press conference to introduce Cromer to the campus and surrounding communities will be held at 10 a.m. Friday, August 16, in the Perry and Sandy Sook Academic Center, located on the north side of Peden Stadium on the Ohio University campus in Athens.

Cromer was identified through a national search launched in June after former Ohio University Director of Athletics Jim Schaus left the Bobcats to serve as the commissioner for the Southern Conference.

Nellis said Cromer stood out from among four finalists who visited campus in early August because of the depth of her experience across the athletics landscape, including day-to-day administration of 19 varsity sports, leading strategic planning efforts, assisting with capital fundraising, and serving as a liaison to campus governance groups and to the Southeastern Conference. In addition, Cromer spent 10 years of her career in the NCAA national office, including as the director of academic and membership affairs, working to advance NCAA academic reform and other policy initiatives. She left the NCAA to join Indiana University as the executive associate athletics director, where she was one of the first women in the Big Ten to supervise all elements of a collegiate football program.

"I am humbled and honored to join a University that has been consistently competitive in the Mid-American Conference and that has a stellar reputation for integrity, inclusive excellence and ensuring student academic success," Cromer said.  "I look forward to joining the outstanding OHIO athletics student-athletes, coaches and staff as we engage with our campus to support our student-athletes in their academic pursuits while winning conference championships."

Cromer, who grew up in a small community in Southern Missouri, said the beauty of the campus and the region added to her enthusiasm. "It is absolutely a beautiful part of the country.  I'm looking forward to a memorable first fall football season in Athens."

What they are saying about Julie Cromer:
"With the naming of Julie Cromer as Director of Athletics, Ohio University is gaining one of the outstanding up and coming leaders in intercollegiate athletics. Throughout her career as an administrator at the NCAA and at several prominent institutions around the country, Julie has been a respected voice within intercollegiate athletics. In working alongside Julie within our program, it is clear to me that she shares the same focus and commitment to student-athlete success. I want to congratulate Ohio University on their selection. Julie and her husband Will are tremendous additions to Ohio University and the Athens' community." – Hunter Yurachek, Vice Chancellor and Director of Athletics, University of Arkansas

"Julie Cromer has a wealth of diverse professional experiences that have prepared her to lead the Ohio athletics program.  She has long been viewed as a leader in the profession, Julie has a deep appreciation for the role of intercollegiate athletics in higher education and an understanding of the values not only of Ohio University but also the Mid-American Conference.  I look forward to working with her, and welcome Julie to MACtion!" – Jon A. Steinbrecher, Commissioner, Mid-American Conference

"Julie is a great administrator, a great leader and will be a great athletics director at Ohio University. She's been an import asset to Razorback Athletics and I appreciate her service as interim AD, which helped the program and the university immeasurably." – Joe Steinmetz, Chancellor, University of Arkansas

"Ohio University could not have made a better choice than Julie Cromer for their next athletics director. She has a well-earned national profile in intercollegiate athletics as a visionary leader, shrewd strategist, and effective administrator. She is very highly regarded as a policy expert going back to her days at the NCAA national office, and she has also distinguished herself as a very effective hands-on administrator during her successful on-campus tenures at Indiana and Arkansas. The Bobcats have hit a home run with Julie, and I think they are very fortunate to have her." – Fred Glass, Vice President and Athletic Director, Indiana University

"As the first woman appointed as Director of Athletics at Ohio University, Julie will make a powerful and immediate impact. I've had the pleasure of knowing Julie for several years, and she currently serves on our Board of Directors. She's a strategic and visionary leader with an expansive skill-set and broad portfolio of experience. Her proven track record of success is a result of her deep expertise developed throughout her career as an industry leader with a strong presence on the national level. Ohio University Athletics is destined for excellence with Julie Cromer Peoples as their next AD!" – Patti Phillips, CEO of Women Leaders in College Sports

About Ohio University
Ohio University strives to be the best student-centered, transformative learning community in America, where approximately 35,000 students realize their promise, faculty advance knowledge, staff achieve excellence, and alumni become global leaders. OHIO is committed to fostering, embracing, and celebrating diversity in all its forms. Our Athens campus offers students a residential learning experience in one of the nation's most picturesque academic settings. Additional campuses and centers serve students across the state, and online programs further advance the University's commitment to providing educational access and opportunity. Visit www.ohio.edufor more information.

About Ohio University Athletics
Ohio University Intercollegiate Athletics sponsors 16 varsity team and competes in the Mid-American Conference where it served as a charter member of the league. The Bobcats are the only team that remains from the original conference that was founded in 1946. The mission of Ohio University Athletics is to successfully develop the student-athlete as a person, student and athlete. Athletics also contributes to the university through athletic and academic achievement, generates visibility, promotes institutional pride, enhances campus life and serves as a connection with alumni and fans. 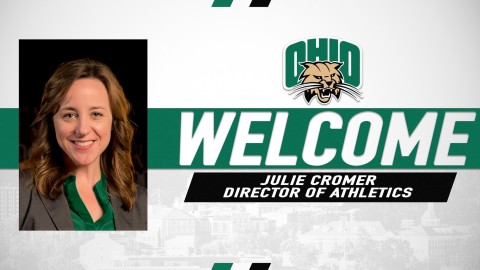