Lipitz begins at UIC on October 28, 2019. He will succeed Garrett Klassy, who served as the Director of Intercollegiate Athletics for the last two years.

"Michael possesses the passion and experience to foster the academic success of our student-athletes, improve their overall experience, and lead the Department in achieving competitive excellence," said Amiridis.

Lipitz joins the Flames after eight years at North Carolina State University, a Division I, Atlantic Coast Conference (ACC) program, with 250 employees, 23 sports and 550 student- athletes. As deputy athletics director, he was responsible for the daily operations of the department and oversaw personnel and legal matters for athletics, capital projects, facilities and operations, equipment, championships and special events. He also supervised the football, women's basketball and men's and women's tennis programs.

Lipitz led a number of major initiatives at NC State, including: the $35 million renovation of the historic Reynolds Coliseum to enhance seating, infrastructure and fan amenities; the construction of the $14 million Close-King Indoor Practice Facility to serve football, track and field, and other sports; and the creation of the NC State Athletic Hall of Fame.

"His leadership and proven success at outstanding athletic programs, along with his superb analytical skills and experience in coordinating and implementing ambitious strategic plans for nationally competitive athletic programs distinguished Michael from a very strong pool of candidates. I am confident he can lead UIC Athletics to new heights," said Amiridis.

"I am honored to join the University of Illinois at Chicago under the leadership of Chancellor Amiridis," said Lipitz. "As a Division I program at a top public research university in one of the world's most vibrant cities, Flames Athletics is uniquely positioned to deliver an exceptional student-athlete experience and to compete at the highest level. My family and I are excited to be part of the UIC community."

Lipitz holds a law degree from Villanova University and a bachelor's degree in political science from the University of Maryland, where he was a captain of the men's tennis team. He and his wife, Kerry, are the parents of two sons, Henry and Charlie.

"What They're Saying About Michael Lipitz"

Debbie Yow, Former Director of Athletics, University of Maryland and NC State University: "UIC has made a wise choice. No one will outwork Michael. His collaborative and strategic approach will energize those who care about UIC. Additionally, his proven experience in elevating teams and programs will encourage his coaches, athletes and boosters. In Michael, they have a leader who know how to make real and sustained progress on all fronts."

Sherard Clinkscales, Director of Athletics, Indiana State University: "Michael is a seasoned senior administrator that understands the commitment required to lead an athletics department. He will work tirelessly to provide the best possible student athlete experience. He will set high expectations and work collaboratively with all stakeholders to see it to fruition."

Kevin Keatts, Men's Basketball Head Coach, NC State University: "Michael is the consummate professional. He has a vision and the skill set as an athletic director to implement that vision. I know he has the ability to lead any athletic department in the country and will do a tremendous job at UIC."

Warwick Arden, Executive Vice Chancellor & Provost, NC State University: "We will all miss Michael very much but wish him all the best. I think of Michael as a consummate professional. Always deeply knowledgeable, approachable, calm and deeply caring. He will be a great asset to UIC and we congratulate you on a great hire!"

Kyle Spencer, Men's Tennis Head Coach, NC State University: "Michael is a dynamic leader and has been an absolute joy to work with as not only our deputy athletics director but also as my sport administrator. He shared my vision of the program and went to the ends of the earth to get what we needed. He was always there for me personally and professionally from the day I was hired. While it will be a loss for NC State, it will be a great gain for UIC. He will do a great job elevating the department as he cares about every sport and every student-athlete and the opportunity to compete at the highest level."

Braden Holloway, Head Swimming & Diving Coach, NC State University: "Fabulous decision for UIC! Michael is not only a great leader and visionary for athletics, he is a people first kind of guy. He puts his teams and coaches at the forefront of the athletics department's goals. Creating unity and brand for all of the department, Michael knows the path to building and sustaining success!" 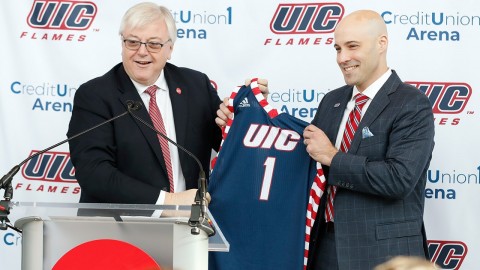