Burg comes to Statesboro after four successful seasons on Chris Beard's staff at Texas Tech, and he is the first hire for Benko, who was named Georgia Southern Director of Athletics in March.

In Burg's four seasons with the Texas Tech program, the Red Raiders went 94-44 with two deep runs in the NCAA Tournament, including an appearance in the 2019 national title game. Burg served as an assistant coach the past two seasons after serving as the program's Chief of Staff in 2016-17 and 2017-18, where he was involved in all facets of the program.

"We are thrilled to announce Brian Burg as our next head men's basketball coach," said Benko. "Brian's commitment to the comprehensive development of our student-athletes on-and-off the court resonated with the search committee.  As we spoke to some of the best and brightest college basketball minds in the country, his name continued to come up time and again.  Brian has mentored under some of the top coaches in the country, and we know this experience will benefit our program tremendously.  Coach Burg will hit the ground running this week, and we look forward to him having a long and successful career with Georgia Southern University."

Burg, who is described as one of the nation's top recruiters by his peers, brings nearly a decade of experience as an assistant coach at the Division I level with stops at Campbell, North Carolina Central and at fellow Sun Belt school Little Rock under Beard in 2015-16.

Over the past seven seasons, Burg has worked for programs that have compiled a 176-60 record, highlighted by four NCAA Tournament trips and an NIT appearance. The teams also have posted an 88-36 conference mark, including Texas Tech's first Big 12 regular-season title as well as two MEAC and one Sun Belt regular-season championship.

"This is a dream come true! A year ago, this weekend, we were playing Gonzaga for a spot in the Final Four, and today I am named head basketball coach at Georgia Southern University," said Burg. "I couldn't be more excited. What a year it's been! I want to thank President Marrero, Director of Athletics Jared Benko, Senior Associate Athletics Director Reggie Simpkins and Faculty Athletics Representative Dr. Chris Geyerman for the confidence they've shown in me and the trust they've placed upon me. I also want to thank Chris Beard, LeVelle Moton, Robbie Laing, Kermit Davis and every coach that I have coached under and played for during my career. These men have left an indelible mark on the way that I approach the game each and every day. I'm proud to use the term 'blue collar' as it's the perfect description of the culture that we've worked so hard to instill here in Lubbock, and I can't wait to bring that same work ethic to Statesboro. I'm excited to share my vision and work relentlessly to build a similar culture at Georgia Southern.  Dr. Marrero and Jared have spoken very highly of the young men in our program and assured me that they, too, are ready to go to work in pursuit of a Sun Belt championship."

In his first year as an on-court assistant coach for Texas Tech, the Red Raiders recorded the program's winningest season in school history by going 31-7 in 2018-19. Tech advanced to the program's first Final Four after earning wins over Northern Kentucky, Buffalo, Michigan and Gonzaga before advancing to the national championship game with a 61-51 win over Michigan State in the semifinal in Minneapolis, Minnesota. Before the tournament run, the Red Raiders won the program's first regular-season Big 12 title by going 14-4 in conference play.

No stranger to the Sun Belt Conference, Burg served as an assistant coach on Beard's Little Rock staff in 2015-16. The Trojans began their Sun Belt championship season with a program-best 10-0 record, completed a 30-5 campaign, and overcame a 14-point deficit in the final five minutes during its NCAA Tournament First Round contest en route to an 85-83 double-overtime victory against No. 12-ranked and fifth-seeded Purdue.

The Trojans' 15-game improvement in the win column tied for the NCAA's top spot and Little Rock had three players pick up All-Sun Belt honors during the same season for the first time in program history, led by Josh Hagins on the All-Sun Belt First Team and the NABC's All-District 24 First Team. Roger Woods collected All-Sun Belt Third-Team honors and the 2016 Sun Belt Tournament Most Valuable Player award. Burg was named one of the nation's Top 5 Mid-Major Recruiters by CBSsports.com.

Before Little Rock, Burg spent two seasons at North Carolina Central as an assistant coach. The Eagles turned in an impressive 53-14 record, won 31 of their 32 Mid-Eastern Athletic Conference (MEAC) games and secured berths to the 2014 NCAA Tournament and 2015 NIT.

Burg's first opportunity as an assistant coach at the Division I level came at Campbell, where he organized the program's recruiting efforts and assisted in all phases of the program. The Camels won the 2010 Atlantic Sun Conference regular-season title and set program records for regular season (19) and conference (14) wins.

Burg joined the Campbell program after two seasons as the Director of Basketball Operations under Kermit Davis at Middle Tennessee State. He began his coaching career at Lake Erie College as a graduate assistant from 2003-05, followed by one-year assistant coaching stops at Garden City Community College (2005-06) and Western Texas College (2006-07).

Georgia Southern tied for fourth in the Sun Belt standings last season and has finished in the top-5 in each of its six seasons in the league. GS tallied 20-plus wins for the third straight season, a feat not accomplished since 1986-89, and the Eagles advanced to their conference tournament semifinal round for the third consecutive season, the first time that has happened in program history. 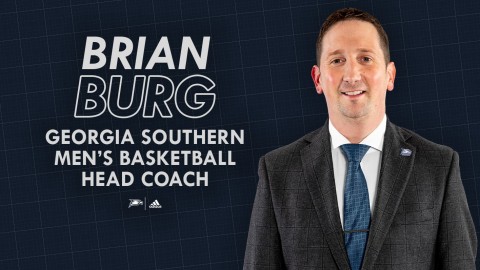